The perfect plants for your pool deck

Jane Ryder, January 2018
Plants enhance any pool area by bringing colour, texture, shade and privacy, and softening hard surfaces like concrete pavers and timber decks. However, exposure to long hours of sunlight, heat-intensifying surroundings, water treatment chemicals and salt that come with a poolside habitat can be tough on many species. Here’s how to create a thriving poolside garden with hardy plants that can cope with lots of sun, heat and occasional sprays of chlorine and salt.   [caption id="" align="alignnone" width="690"] 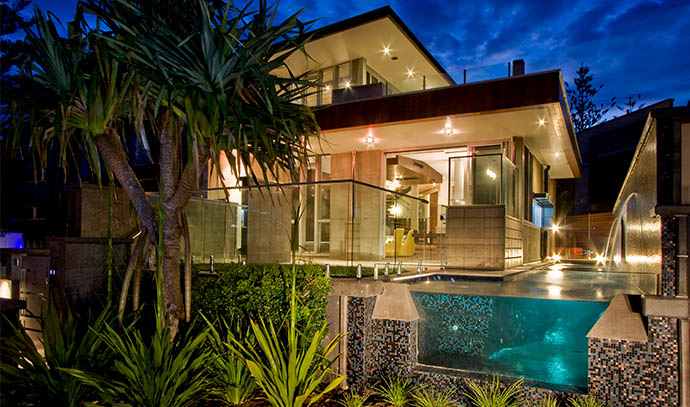 A large Pandanus helps create a tropical ambiance for this swimming pool in Queensland. Image courtesy Majestic Pools and Landscapes.[/caption]

With their dense, rich-green foliage and large flowers, tropical plants create a cool, inviting and private garden while their good tolerance to heat and humidity makes them well suited to the poolside habitat. As many tropical plants that hail from the tropics, they don’t survive in cool, dry and frost-prone regions. “For tropical plants to thrive in your poolside garden, you need to live on or near the coast where there’s a moderate, subtropical or tropical climate,” says horticulturist Colin Green of Colin Green Landscaping on Sydney’s Northern Beaches. Another consideration when creating a tropical poolside garden is the amount of sunlight your pool area receives as this determines whether you buy sun hardy or shade-loving tropical species. “Sun hardy tropical plant varieties include Strelitzia, also known as Bird of Paradise, Hibiscus and Canna Lily, which have red and orange flowers, and New Zealand Flax, which has green and purple-red leaves,” says Colin. According to the ABC’s Gardening Australia, Frangipanis also like plenty of sun and cope well in fertile, sandy soils. “Shade loving varieties include Ferns, Cordylines and Rhoeo, which both have green and hot pink leaves, Alterantha which has delicate purple-green leaves, Clivea which produces clusters of orange flowers, Agapanthus, and the smaller varieties of palm including Parlour Kentia and Golden Cane,” says Colin. “Before making any final decisions on plant species however, ask your local nursery which ones will thrive in your area.” To create a tropical poolside garden:   [caption id="" align="alignnone" width="690"]

Vertical gardens are a great solution for pools located in snug, tight or narrow spaces. Image by photographer Glenn Weiss courtesy of Argo.[/caption]

Many native species cope well in the poolside habitat as they are hardy, low shedding, evergreen and attract native birds. “Natives cope with lots of sun and heat and require little watering and care,” Colin explains. As with planning any garden, Colin recommends asking your local nursery for advice on natives that will thrive in your area. “Depending on where you live, hardy natives suitable for poolside planting include grasses Philotheca myoporoides, also called Long-leaf Waxflower which has small white flowers; Acacia Fimbriata Dwarf, which has clusters of yellow blooms; Westringia fruiticosa or native rosemary which has delicate white flowers; Kangaroo Paw; and small varieties of Banksia and Grevillea such as Grevillea speciose and Grevillea sericea.” To create a native poolside garden: Some non-native species that can cope well in poolside gardens include Lamb’s Ears, which creates good ground cover with its silvery leaves that are literally as soft as a lamb’s ear, Conebush which has red/orange leaves, Pittosporus golfball and Raphiolepis indica, also known as Indian Hawthorn, which grow into thick hedges. And to help keep soil and fallen foliage contained and pool wash water out, add a natural durable timber edging such as Rola Pak Ezy Edge Garden Edging from Bunnings, which is made from rot-resistant treated pine.   [caption id="" align="alignnone" width="690"] 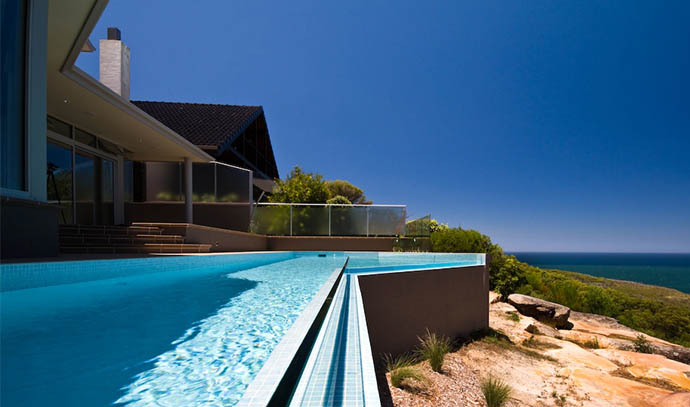 Hardy species that can withstand chlorine splash and salt spray were chosen for this modern coastal swimming pool. Image courtesy of Crystal Pools.[/caption]

Get your clippers and tape measure ready because balance, order, straight lines, hedges and topiary plants are key signatures of the modern formal garden. Colin advises to visit your local nursery to discover species that will suit this look and thrive in your area. “For those who live in coastal regions with a moderate climate, your plant list can include: Gardenia; Camellia sasanqua; Clivia; Liriope; Agapanthus; Buxus; Lilly Pilly; Dwarf Conifer; New Zealand Flax; Yucca; hardy, quick growing Hawthorns such as Raphiolepis Apple Blossom and Raphiolepis Snow Maidens and succulents like Agave,” says Colin. Regardless of where you live and the species of plants that suit your region’s climate, it’s their positioning and clipping that are key to creating the modern formal look. Frame your pool with a modern formal garden by: Whatever poolside garden style you choose, keep it healthy with regular watering and enjoy its beauty at night-time too with the addition of some soft pool and garden lights. Extract courtesy of Swimart
Back to top