Mirror mirror on the wall ...

Phyllis, August 2015
Let’s face it, ever since Snow White’s evil stepmother started obsessing with being the fairest one of all, mirrors have had a fairly bad rap. But fairy tales aside, these handy pieces of silvered glass have moved beyond their original purpose as a means to make sure our hair’s neat and there’s no parsley in our teeth. Forget walls, balls and wardrobe doors, mirrors have stepped into the limelight become artworks in their own right. While our ancient forebears had to make do with streams and lakes to see how they looked (not a terribly good idea in the case of Narcissus), about 6000 years ago the Turks came up with the first means of checking for that pesky parsley – polished stone or black volcanic glass mirrors. In the ancient world mirrors were made of highly polished metal, usually copper. An Etruscan mirror dating from the fourth century BC has a scene from Homer’s Odyssey on its back. The Romans are usually credited with developing glass mirrors, but these were not widely used until about 1500 when the Germans made the first convex mirrors. Venetian glass makers developed the kind of flat, silvered mirrors we know today. 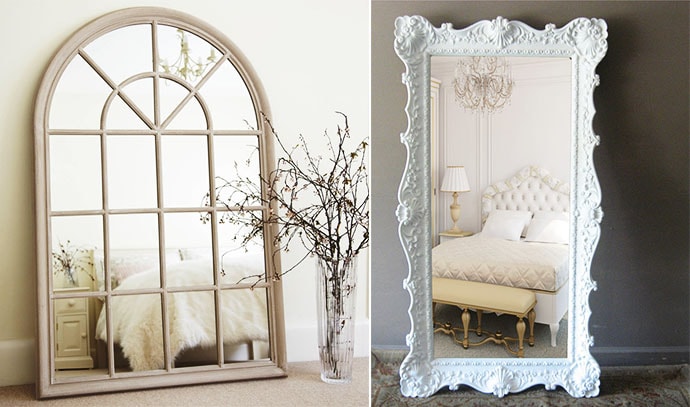 Fast forward to the 21st century and mirrors have become an essential part of modern interior design. Placing them strategically can make rooms appear larger, create an illusion of space and brighten a dark spot by reflecting natural light. They’re also a beautiful decorating feature and, if you’re names Maleficent (who knew she had a name?) great for the ego. A good quality mirror will have high quality silver content, several layers of back painting and be copper free. A lesser quality of mirror may have aluminum backing instead of the silver nitrate. Hallways can be not only dark, but long and narrow. Mirrors hung along both walls will make it appear lighter and wider, while a mirror at the end of the passage will make it appear longer. A modern decorating trend is to use floor to ceiling mirrors in bedrooms and bathrooms to make them appear brighter and bigger. They’re also a great way to disguise wall blemishes or add emphasis to a small but attractive feature on a side table or shelf such as a candle or ornament. 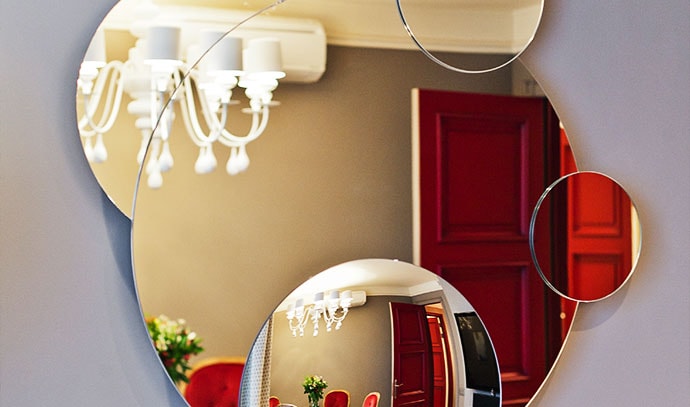 But if you’re after an artwork but funds are limited, why not fill a wall with lots of mirrors? Scour some op shops, garage sales and flea markets and you’ll surprised by the array of gorgeous old mirrors to be had for next to nothing. When you get them home, do a rough sketch of all the shapes, then play around with arrangements using the largest as a centrepiece, before hanging them on the wall. Of course, you can always turn get really artistic and use mirrors to create a spectacular wall hanging or sculpture. The shards of a cracked mirror can be glued to a board or canvas to create a picture. For a 3D effect, suspend broken mirror shapes from a board using fishing line, layering them horizontally and vertically. Or think outside the square (and the house) with a sculpture of mirrored poles in the yard. Another, simpler, idea, is to hang a mirror on a wall to make the yard seem bigger. The illusion will work particularly well if the wall is covered in greenery or the mirror is part of a door fixed to the wall. Then the mirror will create an illusion of looking through a window into a garden beyond. With paintings, the emphasis is usually on the art itself, so the less elaborate the frame, the better so that it doesn’t detract from the main attraction. The reverse is the case with mirrors, and many are often admired for their unique frames or shapes and ornamentation as well as their reflective quality. [Tweet "Mirrors have also been symbolic in art throughout the ages."] The oracle of Apollo at Delphi demanded of the ancient Greek ‘know thyself,’ and mirrors have often been used as symbols of wisdom and self-knowledge. But Apollo also required ‘nothing in excess,’ and the mirror can just as easily imply vanity, an unhealthy amount of self-regard. The peril of over admiring one’s mirror image is encapsulated in the ancient Greek myth of Narcissus, the beautiful boy who having fallen in love with his reflection in a pool, pined away and was turned into a flower..   More inspiration on Pinterest: pinterest.com/HomeloansLtd
Back to top