How to brighten up a dark house

Phyllis, December 2015
When we bought our Victorian cottage it had rising damp, dark rooms and a decidedly claustrophobic feel. Don’t get me wrong, we loved it, but something had to be done. While not everyone lives in a Victorian house, there are plenty of other homes that present similar problems, be they Federation period, old home units or modern townhouses. But there are several steps you can take to lighten and brighten your living space.

Deal with the damp

Rising damp is common in older homes, but can affect buildings of any age. Not only is this bad for the building’s structural integrity, it can lead to cold living conditions and an unhealthy atmosphere brought about by the build-up of mould and mildew. There are pros who will try to tell you that your only option is an expensive one: install a new chemical or physical damp course. But take my advice and try the least expensive option first – improve the air flow under the house. I wanted to install extractor fans straight up, but my husband, thankfully, insisted we start by putting in some vents. This was no mean feat by the way. The house is built only about 50cm from the ground on solid brick foundations that are about a foot thick and run along the length and breadth of each room as a wall. We used a Kango drill to make holes in the external and internal footings then added metal grilles to keep pests out. I think we also moved about a ton of earth from under the floors where it was touching the boards in some places. It was incredible what an enormous difference this simple and cost effective exercise made to the house. The rising damp was gone in no time and 15 years later has yet to make a reappearance. Turn on the sun

The windows in our house are quite small and the rooms that face south are incredibly dark, as is the front hallway. There was also a small dark hall in between the kitchen and bathroom that were housed in an extension built in the 1950s. An upstairs attic reached by a staircase was perfect as a bedroom if it weren’t so light-deprived. We brought the light into the house in several ways. Skylight windows were installed in the attic roof to allow both light and fresh air into the space. My only regret was that we tried to save money by installing smaller windows. Given my time over I’d get the bigger size. Sky tubes were also installed to bring light into the living room and adjoining bedroom. Both originally had two windows each, but the extension containing the kitchen and bathroom meant that only one window in each faced the outside.   [caption id="attachment_3573" align="alignleft" width="690"] Image courtesy of Taubmans Paint[/caption]   Speaking of the kitchen and bathroom, as major remodelling job was on the cards anyway, fibro sheeting on the internal and external walls had to be removed (ALWAYS GET A PROFESSIONAL FOR THIS), which took us back to the framework. This presented the perfect opportunity to remodel. An internal, non-load-bearing wall that created a dark narrow hallway between the two rooms was removed. Then the external kitchen wall was replaced with two sets of French doors. Not only did this flood the room with light, it became much more spacious. The bathroom was already quite large, but despite having two windows was dark because of the apricot and brown colour scheme and brown timber cabinets, not to mention the three solid tiled walls that formed the shower recess. We got rid of the shower wall and opted for a screen-less look. (These days the trendy name is wet room.) White paint and white tiles with some burgundy trims, a new white engineered stone vanity top, huge mirror and brass fittings brightened up the room considerably. The success of the French doors in the kitchen inspired us to replace the old solid timber front door with a model that has two frosted glass panes. The addition of a large mirror hung on the wall of the hallway not only brightened the entry but reflected lighted into the adjacent bedroom. A similarly huge mirror was added above the living room fireplace where, again, it reflected the light from the sky tube. 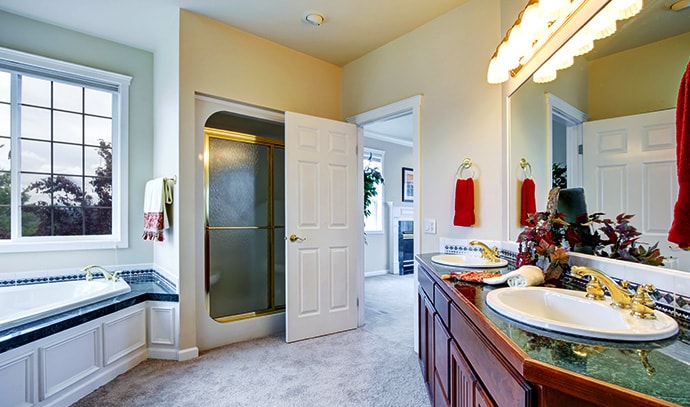 We had a Wattyl colour consultant come to the house to advise us on interior and exterior colour schemes. It was the best $200 we’ve ever spent (especially as we got $100 cashback from Wattyl when we bought our paint). Now you think she’d have told us to go for shades of white, but instead she suggested something we’ve never regretted: shades of green and cream. These colours (mid olive walls, a pale creamy green above the picture rails and across the ceiling, with deep cool cream trims gives the room depth and prevents the high ceilings from making the width of the rooms appear out of balance.

These tips will work anywhere

If you apply these basic principles in any home, you’ll find that you have lighter, brighter rooms that appear more spacious without becoming stark, dull or too hot in summer.
Back to top