Standing desks are all the rage at the moment. And why wouldn’t they be? Health officials are constantly issuing warnings about the dangers of our sedentary lifestyles. Not only do many of us spend about 8 hours a days sitting at a desk, only getting up to make coffee or visit the loo, we then drive home and spend the evening sitting in front of the TV. We drive to the shops, we drive the kids to sport (sort of ironic really) … we’re driving ourselves to death. Sitting for too long has been linked with back pain.[/caption]

The standing desk has been hailed as a means to improve our cardiovascular health and is regularly used by people with back problems as a means to alleviate the pain of sitting for long periods. The jury is still out among researchers about the benefits of standing desks, but those who use them tend to swear by them.

But this new trend in office furniture, it seems, is not so new at all. They were popular among the wealthy during the 18th and 19th centuries and were still in use during the first half of the 20th century.  Notables including Winston Churchill, Virginia Woolf, Oscar Hammerstein, Ernest Hemmingway, Donald Rumsfeld and Benjamin Franklin were among those who favoured them.

Some standing desks can only be used when standing, while others can be adjusted so the user can sit or stand.

An article in the Smithsonian magazine says experts recommended splitting your time between standing and sitting, because standing all day can lead to back, knee or foot problems. The easiest ways of accomplishing this are either using a desk that can be raised upward or a tall chair that you can pull up to your desk when you do need to sit. It's also important to ease into it, they say, by standing for just a few hours a day at first while your body becomes used to the strain, and move around a bit, by shifting your position, pacing, or even dancing as you work. 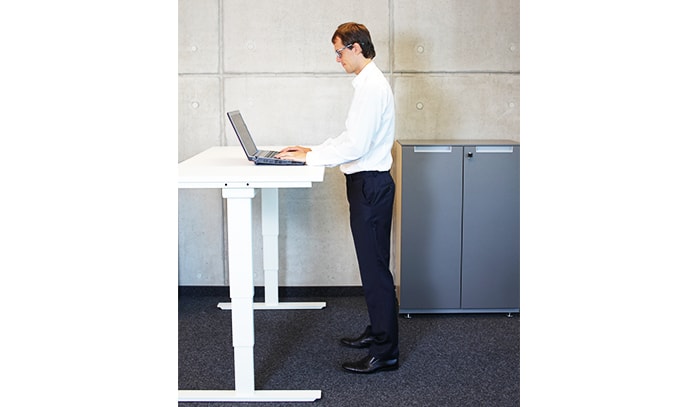 AskMen editor Chris Aung-Thwin shared his experience of using a standing desk in a recent article. He started working standing up 3 years ago after a back injury left him unable to sit without great pain. Chris says that while it took a few weeks for his legs to become accustomed to doing more work during the day, three years later he was glad he took the step. “Now, working upright isn’t only for people with bad backs,” he says. “Pretty much everyone is killing themselves by sitting down all day and we — as a working culture — need to make a change. But making the change isn’t easy. Be prepared for 2-3 weeks of your body yelling at you while it gets used to standing all day. Your legs, back and feet will be getting more of a workout than normal, so they’ll be tired and sore by the end of the day. And it’s not just your body that has to get used to a standing desk — your brain has to adjust as well.

“When I first made the move, I would always sit down when I needed to concentrate. If I had to write an article, go through reports or do something that required intense focus, I absolutely had to sit down. Now, it’s the exact opposite. When it’s crunch time, I put my desk into standing position and plough through my work. I feel even more “in the zone” when standing now than when I was sitting. The biggest thing that I learned about using a stand-up desk? Once you give up sitting you’ll always wonder why you didn’t do so sooner.”