Phyllis, September 2015
It’s amazing how much junk turns up when you start spring cleaning, so why not take the opportunity to have a spring clean-out as well. You’ll be amazed at how much easier it is to keep the house clean AND tidy when you make the time to get organised. Of course the difficulty with getting organised is it takes a lot of time to put all the systems in place to keep you that way. The up side is that once those systems are in place it’s easier to stay organised all year round. The key word being systems. The other being time, because if you try to organise everything in one go, you’ll not only end up with a huge mess, you’ll be mentally and physically exhausted. Next thing you know is you’ve given up. 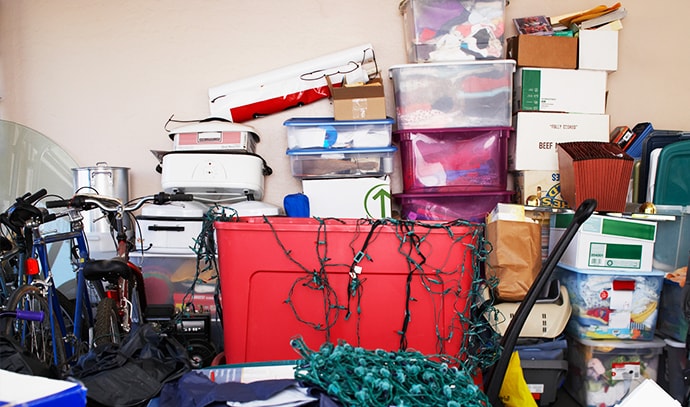 The first thing is to remember is there are two types of organising projects: paperwork and stuff. Let’s save paperwork for another day (tomorrow) and concentrate on stuff. The next thing to do is break the task down into achievable chunks. Room by room is my preferred “chunk” category. Then break each “chunk” or room into tasks. A child’s bedroom could be broken down into the following tasks: wardrobe, toys and books, desk. The kitchen could be broken down into tasks including: pantry, cupboards, fridge. The following method can be applied to every task and I’ll vouch for its effectiveness as I use it constantly. (That doesn’t mean my house is tidy, it just means I have three kids who constantly reduce the place to a state of chaos.) The method? Washing baskets. You’ll need three. One is for stuff you’re going to keep, one is for stuff you’re going to chuck and one is for stuff you’re going to re-home (to charity, friends or family). There is no such thing as an “undecided” basket. The great thing about using washing baskets is you’re going to need them again soon for wash day, so there’s no time to procrastinate. (That’s every day in my case, so I’ve learnt to work fast.) Now systematically work your way through that ONE task. Do not, under any circumstances to haul everything out of everything at once or you’ll end up with chaos and a job so monumental you won’t know where to start (so you won’t). Work quickly and methodically and don’t get bogged down in the minutiae of “micro sorting” (e.g. sorting the toys into separate piles such as trucks, Lego, blocks and action figures). If you do this, trust me, you’ll never finish. The micro sorting is a task for another day. Once you’ve got everything into the three baskets, take the basket of stuff you’re going to chuck and head straight for the bin. Do not detour, do not stop to chat (someone will see what’s headed for the tip and beg to save it). Throw that stuff into the bin without a second thought – no looking back!

Grab some plastic bags or small cardboard boxes and a permanent marker on the way back through the house. Take the basket of stuff to be rehomed and divide it up quickly (you don’t want time for second thoughts) depending on whether it’s headed for the charity bin or a particular friend or family member. Label the bags or boxes and put them in the boot of the car to be taken to their new homes asap. Now it’s time to stop and think. Preferably with a pen and paper in hand. Look at the stuff you’re keeping and ask yourself what categories it can be sorted into. In the case of a toy cupboard: Lego, blocks, action figures, animals, cars, games and “stuff”. Do you have any containers that can be used to store these items? In my case Aldi had some cheap storage crates (no lids). I made labels for each and put the toys away. The tubs live on a book shelf. Packing up is easy for me and the kids because I can see straight away where they go. In the case of my laundry cupboard I used Sistema storage containers that I bought at the supermarket. They're labelled: batteries, candles, light globes, shoe care, rags, essential oils and odds & ends. Sort them into their containers, put the containers away and you’ve finally got a place for everything and everything in it’s place. In short, you’re organised.
Back to top