A brief history of Christmas trees

Phyllis, December 2015
Queen Victoria’s husband Prince Albert may be credited with making Christmas trees popular in Britain, but the tradition actually dates back millennia. The evergreen fir tree has traditionally been used to celebrate winter festivals (pagan and Christian) for thousands of years. Pagans used branches to decorate their homes during the winter solstice, as it made them think of the spring to come. The Romans used fir trees to decorate their temples at the festival of Saturnalia while Christians use it as a sign of everlasting life with God. It’s impossible to be sure when fir trees were first used as Christmas trees, but it is thought to date back about 1000 years to northern Europe. Many early Christmas trees seem to have been hung upside down from the ceiling using chains. Other early Christmas trees were cherry or hawthorn plants that were put into pots and brought inside so they would hopefully flower at Christmas time. People who couldn't afford a real plant made pyramids of timber that they decorated to look like a tree with paper, apples and candles. It's possible that the timber pyramid trees were meant to be like Paradise Trees. These were used in medieval German Mystery or Miracle Plays that were acted out in front of churches on Christmas Eve. In early church calendars of saints, December 24 was Adam and Eve's day and the Paradise Tree represented the Garden of Eden. It was often paraded around the town before the play started, as a way of advertising the play. The plays told Bible stories to people who could not read.

It started in Latvia

The first documented use of a tree at Christmas and New Year celebrations is in the town square of Riga, the capital of Latvia, in 1510. In the square, there is a plaque engraved with “The First New Year's Tree in Riga in 1510”, in eight languages. There is also a picture from Germany in 1521 that shows a tree being paraded through the streets with a man representing St Nicholas riding a horse behind it. 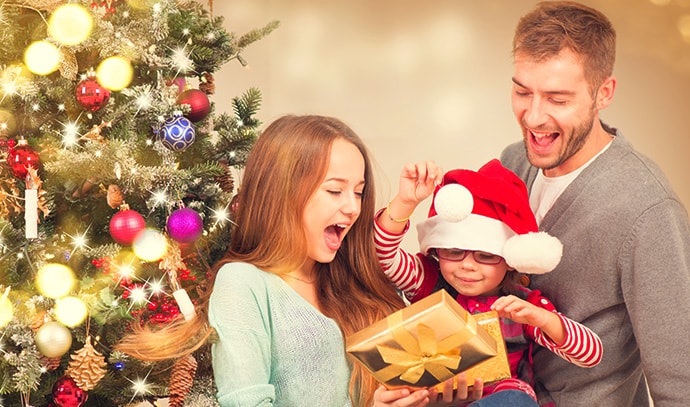 The first person to bring a Christmas Tree into a house, in the way we know it today, may have been Martin Luther. A story is told that, one night before Christmas, he was walking through the forest and looked up to see the stars shining through the tree branches. It was so beautiful, that he went home and told his children that it reminded him of Jesus, who left the stars of heaven to come to earth at Christmas. In Germany, the first Christmas trees were decorated with edible things, such as gingerbread and gold covered apples. Then glass makers made special small ornaments similar to some of the decorations used today. In 1605, an unknown German wrote: “At Christmas they set up fir trees in the parlours of Strasbourg and hang thereon roses cut out of many-coloured paper, apples, wafers, gold foil, sweets, etc.”

Baby Jesus was the first “star”