Snuggle up with the latest linen looks for autumn

Phyllis, March 2016
Hazy watercolours, super soft jerseys and textured geometrics are the latest look in bed linen this autumn. Royal Doulton, yes they make more than fine china, has released its Autumn Winter 2016 bedlinen collection – and it's dreamy to say the least. The range has a layered look in both colour and pattern. Neutral colour palettes – oatmeal, clay and alabaster – are teamed with chalky greys and cement – while colour pops of mint and maize are used sparingly but with great effect.   Above image (1815 Multi) courtesy of Royal Doulton Headlining the range is 1815 Multi, a reinterpretation on one of Royal Doulton’s original patterns of two centuries ago. It has adapted the dipped colour design for tableware into a wash of watery hues on linen. The colour palette includes rose tinted and blush pinks – the new neutrals – and grape on a background of blues and sea greens. Maize and sand have also been introduced to matching pillowcases.   [caption id="attachment_4274" align="alignnone" width="690"] 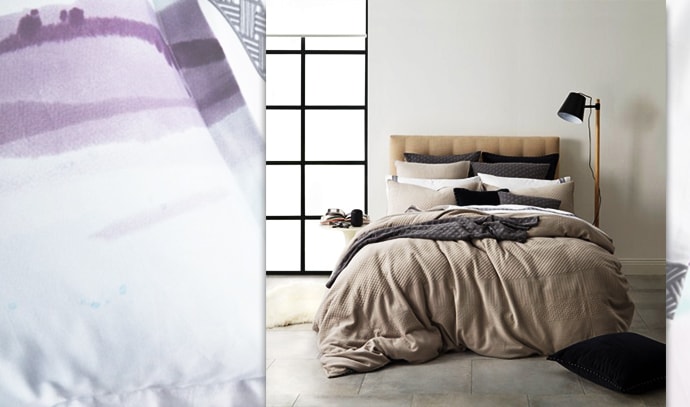 Adler Linen | Image courtesy of Royal Doulton[/caption]   The Adler Linen range is a casual, contemporary geometric, luxuriously soft and cocooning in a jersey knit that creates a beautiful drape. The design features panels of subtle geometrics to create both texture and visual interest in the neutral linen colour palette. Perfectly suited to layering, Adler Linen teams well with the Habitat throw, square cushion and European pillowcases in Concrete – an indulgently textured jersey with a woven dot pattern in cement grey. The Harper Navy European pillowcase and square cushion, in a navy brushed velvet, adds a further element of luxury to the look.   [caption id="attachment_4278" align="alignleft" width="690"] 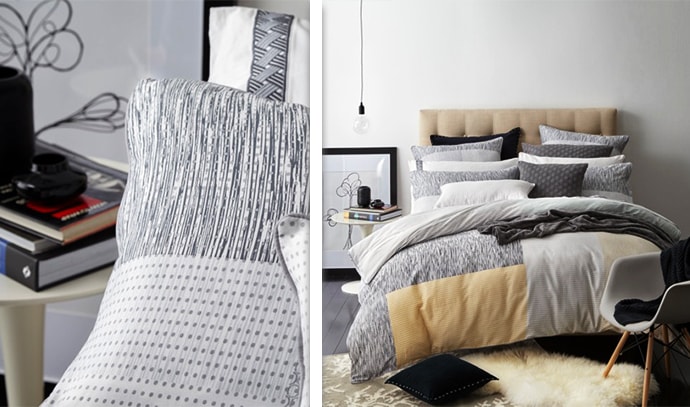 Attica Chalk | Image courtesy of Royal Doulton[/caption]   Attica Chalk is a free-spirited take on abstract artwork – a large scale patchwork of loose brush strokes and dot patterns cleverly creates visual contrast and the illusion of texture. The seasonal colour palette has an inspiring twist – tonal chalky greys form the canvas while highlights of maize and mint add vibrancy. Further texture can be introduced to the mix with throws, cushions and European pillowcases in Habitat Concrete. Finn Silver takes its design influences from Scandinavian illustrations featuring repeat foliage motifs in charcoal and mint on a crisp white background. The border graphics are repeated as an all-over design in charcoal on cushions and European pillowcases. A coordinating pattern in fresh mint is featured on the reverse of the quilt cover.   [caption id="attachment_4279" align="alignleft" width="690"]