News - Home renovation: Part 3 – All for a balcony and a view
home-outside-shot-bricked-wall-balcony

Home renovation: Part 3 – All for a balcony and a view

Sarah Watson, January 2015
As the outside of the house begins to take shape and a new balcony is built providing brilliant views over the valley, the downstairs makeover begins.   By the time my husband Mark arrived home from a two week business trip, our house was taking shape. The builders had not only painted the new fascia boards, but the pale cream paneling on the outside of the house was also washed away under a coat of ‘woodland grey,” which instantly modernised the appearance of the house. As I went to work and the kids went to their respective school and child care, Mark got stuck into downstairs. Billed as a rumpus room with two storage areas, this sizable space also had the benefit of being five degrees cooler than upstairs, so ideal for the warmer climes we were experiencing.

The rumpus room was storing our still to be unpacked moving boxes, which were rehoused (but unfortunately not emptied) in the double garage, leaving the rumpus room a ‘clean slate.’ And while Mark had mumbled words such as ‘home cinema / bike room / surfboard room’ in his original wishlist, the plans for the rumpus room were a little more (in my opinion) purposeful. First there was the small problem of the previous owner’s stuff. The house was a deceased estate and behind a small, unassuming cupboard door, there was a lifetime of undisturbed old and broken belongings stored underneath the house, out of sight to everyone else, but taking up valuable storage space for us. Donned in the latest head to toe ‘coveralls’ and seeing ‘man cave’ potential (quite literally) Mark climbed in with thoughts of finding vacuum packed bags of hundred dollar bills. But instead his effort was rewarded with a skip-full of rubbish that included a mattress, fluro lights, a full length mirror, wood – and lots of it, old curtain rails, an old coca-cola crate, broken chairs, empty paint tins… and many other worthless items!

The floor in the rumpus room was tiled a deep red wine which, combined with the cedar lined walls, enhanced an underground dungeon feel but with the smell of a sauna. So with the boxes cleared, the whitewash began – floor to ceiling. The walls, ceiling and floor were transformed into a white haven any ice princess would be proud of, and after multiple coats of primer and paint leaving a spacious and modern minimalist look. One of the old storage rooms was selected for a home office, and a bench style desk was built along one side of the room. The desk height was dictated by the house foundations, probably 50mm higher than the average, but less of a problem for a 6’2” frame. As the computer moved in and shelving was filled, the small, shabby storage room was transformed into a hideaway office with a rumpus room entrance that could be a studio / spare bedroom / TV room as we so desired!   [caption id="attachment_2879" align="alignleft" width="690"] 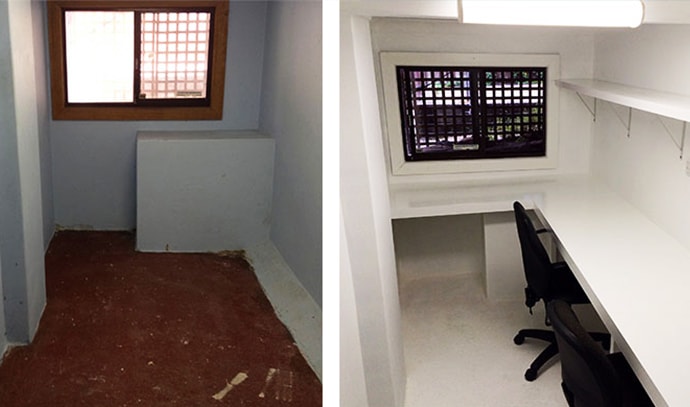 The office - before and after[/caption]

With growing children, this move was upsizing for us, leaving behind a tiny townhouse by comparison. The townhouse, although small, had provided ample storage space whether it was the built in double wardrobes or the double garage. And while the under house ‘man cave’ offered storage potential, lining it and making it an option was a long way down the priority list. So we began creating storage. The builders ripped out the cedar clad wall in the rumpus room and replaced it with floor to ceiling (white, obviously) melamine cupboards. The shelving was great for those miscellaneous objects you don’t need every day, as well as an additional wardrobe for clothes. A middle door was added in the same style as the cupboard doors creating a secret door to the garage and a great hiding place for the kids. The storage was about 1m wide but in a 5.1m by 5.4m room, which made minimal impact. 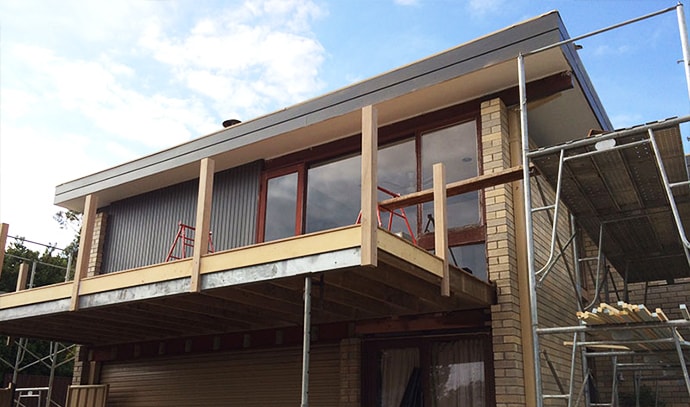 At the same time, the builders began work on the new balcony. The original cantilevered balcony with badly rotting wood was pulled down with minimal effort. A huge 300 PFC beam weighing around 500kg was winched into place and placed above the two supporting posts to hold up the new balcony. This engineering feat ensured the balcony could comfortably hold a table and the outdoor cooking centre (aka the new barbie). And, almost as important, it ensured we could swing the car out of the garage without risk of hitting the support poles when we leave the house bleary eyed for work in the morning. For every panel of decking secured, the noise penetrated every wall through the house and when the kids started walking around with their hands over their ears, it was any easy decision to leave as early as possible in the morning. A wasp nest in the wall temporarily stopped proceedings until it was removed by the builder least skilled in that great decider – ‘rock paper scissors’ (he received a few stings for his bad fortune). But with the balcony built and the old cracked door and windows removed, our new three-panel balcony glass door could be fitted, opening the house to a great outside / inside space. 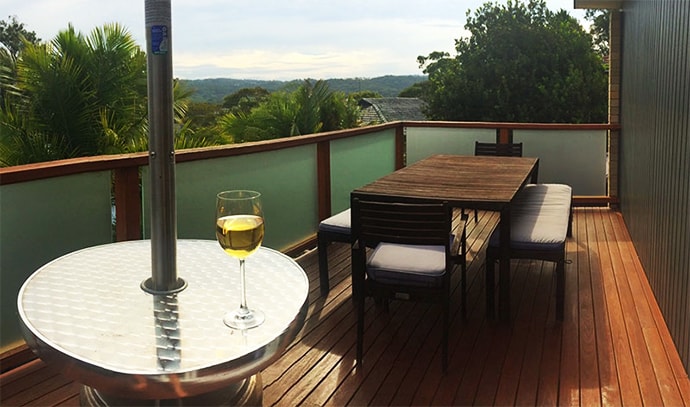 Drinking in the view

As the balcony was finished with frosted glass secured to the sides, it provided a great space for three-year-old Charlotte to set up her toys and play within sight. And for us, it suddenly opened up a vast view of the surrounding area, a largely unexpected delight and certainly never covered on the real estate brochure because it was previously so inaccessible. That evening we drank in the view overlooking the valley where our old townhouse was nestled and marveled at our vantage of the beautiful evening sunset with the first of many glasses of wine on our new balcony.   Read Part 1: Buying potential Read Part 2: Moving with Builders
Back to top