Green living tips that save you money

Hedgie Gundry, June 2017
When it comes to tackling climate change and doing our bit for the environment, the overwhelming scale of the problem often means we don’t really know where to start. And if we do decide to play our part, we’re often unsure of how much of an impact we’re really going to make. In recent months however a number of high profile campaigns have helped re-energise the national environmental debate. The call for an Australia-wide ban on plastic bags is gaining momentum, research on how much damage plastic is doing to our oceans has been widely publicised, and the ABC’s eye-opening three-part series War on Waste has put the issue of waste on the agenda for the first time for many Australians. Here at HomeHub, we’ve put together our top five practical tips to help you live more sustainably, reduce your household’s impact on the environment – and also help you to save money.   [embed]https://www.youtube.com/watch?v=aCUdU6zRyZc[/embed]

One of the best places to start is to look at how much money we waste each year on food. According to the recent ABC documentary series War on Waste, Aussie families throw out 2.6 million tonnes of food every year, costing the average household budget a staggering $3,500. This is approximately 20 percent of the food we buy and to put this into context, each week, one in five of your bags of groceries will head straight into landfill.

Contrary to popular belief, food waste doesn’t just quickly rot away. The impact on the environment is huge. Because of the lack of oxygen in landfill, rotting food waste creates methane, a greenhouse gas 25 times more potent than the carbon dioxide produced by your car. 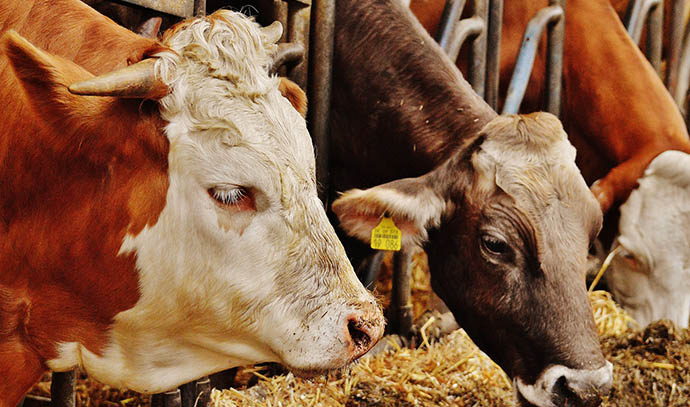 Because livestock produce huge amounts of greenhouse gases such as methane and nitrous dioxide, they are a massive contributor to climate change.[/caption]

Although we’re a nation of meat lovers, reducing the amount of red meat we eat each week not only costs less than other tasty protein sources, it also makes a big difference to your ecological footprint.

In the last five years, we’ve seen an increase in fashion brands selling high volume, low cost clothing. And according to the ABC’s War on Waste, our love of fast fashion is becoming the fastest growing waste problem in Australia.

We spend over $5bn on fashion each year and over half a million tonnes of textiles and leather end up in landfill. The quality is now so bad, charities such as The Smith Family spend over $1m of valuable funds each year disposing of unusable donated clothing.

What we sometimes don’t realise is that a huge amount of energy and resources are required to make clothes such as cotton, oil and water. And the environmental impact around the world is often irreversible. The World Wildlife Fund with National Geographic recently calculated that it can take 2,700 litres of water to produce the cotton needed to make a single t-shirt. That’s enough drinking water for one person for almost three years.

Visit your local garage sales or hold one yourself to recycle unwanted clothes, toys and furniture.[/caption]

Another green living tip to help save or even make you money is to think twice before buying new items for the home or taking unwanted household goods straight to the tip.

Good quality second-hand items such as clothes, toys, furniture and appliances are getting a new lease of life thanks to websites such as eBay, Gumtree and Facebook marketplace pages. As the old saying goes, one man’s trash is another man’s treasure. Not only are there bargains to be had, but buying and selling second-hand goods is also one of the best ways to reduce landfill and our precious natural resources.

In many cases, you don’t even need to pay for unwanted goods. Websites such as Freecycle, Ozrecycle and Ziilch allow you to search for gifted goods that simply need a new home – all you have to do is pick them up.

And last but not least, with increasing electricity prices and water rates across Australia, reducing your energy and water consumption around the home is one of the best ways to save money and also reduce your impact on the environment.

According to the Department of the Environment and Energy, Australian households are directly responsible for about one-fifth of Australia’s greenhouse gas emissions. And the average household’s energy use generates over seven tonnes of greenhouse gas emissions. Although climate and house design have a big impact on your energy and water usage, there are some simple everyday actions you can take to make a real difference.

For further information on reducing energy, water and waste around the home, head to the Australian Government’s Your Energy Saving website.

Now in its eighth successful year, the Australasian Waste and Recycling Exhibition (AWRE) continues to go from strength to strength as an industry leading event for the waste and recycling community. This year's showcase, which will be held at the Melbourne Convention and Exhibition Centre between August 23-24, will introduce businesses to a range of innovative technologies and initiatives designed to collect, sort and process waste from the municipal, commercial and construction sectors. [/alert]   [embed]https://www.youtube.com/watch?v=uznCRwZ2YTA[/embed]
Back to top