Veda Dante, November 2016
When engineer Willis Carrier designed the first air conditioner in 1902 to control the humidity in a New York publishing house - a problem that had long plagued printers - I wonder if he knew that his groundbreaking solution would change the way people around the world lived, worked, and played? By removing heat from a confined space, thus cooling the air and removing humidity, Willis' modern electrical air conditioning unit inspired a population boom in America's warmer southern states like Florida, Texas and Arizona. Closer to home, residents in Queensland, Western Australia and the Northern Territory can thank Willis' ingenuity with being able to cope with summer temperatures that regular hover above 30 degrees Celsius. Often referred to as AC, A.C., or A/C, modern home air conditioners comes in two main types - evaporative and refrigerative. The former cools the air via evaporation while the latter cools the air through a heat extraction process. Portable, window, reverse cycle, split or ducted - choosing what's right for your home or business depends on a number of factors, including your location, the size of the area that needs cooling, and of course your budget - not only for the initial purchase cost but also the running costs.   [caption id="attachment_6303" align="alignleft" width="690"] If you're renting, moving house, or on a tight budget, portable air conditioners might be the way to go. Easily moved from room to room – or house to house – with minimal set-up, they work a bit like built-in air conditioning, which is drawing in warm and humid air, cooling and dehumidifying it, then blowing it back into the room. Single-duct models feature flexible refrigerant lines, or hoses, to remove warmed air out through the window, so this system isn't an option for windowless rooms or workspaces. The Italian designed Dados pictured above, not only provides cool air in summer and warm air in winter but also works as an effective dehumidifier, removing an impressive 65-litres of moisture from the air a day.   [caption id="attachment_6302" align="alignleft" width="690"] 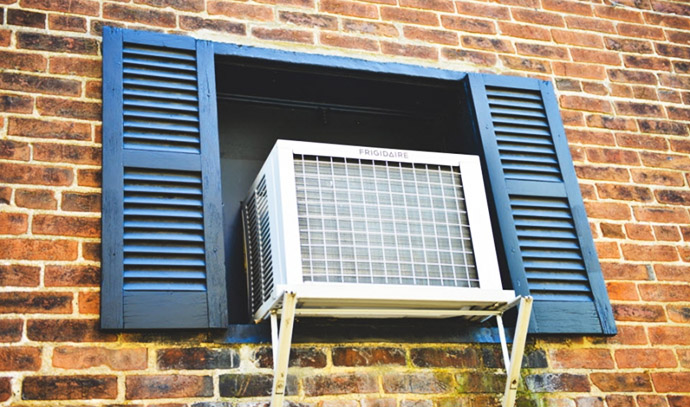 Window aircons are commonly installed in an open window. Image via Angie's List.[/caption]

These types of aircons have been around for decades, namely because they effectively cool a room and can be easily installed and removed. Put simply, window systems use a gas compressor to suck warm air out of the room where it's passed over a cooling coil and cooled down by the internal refrigerant. Chilled air is then pumped back into the room via vents, reducing both the air temperature and humidity level.   [caption id="attachment_6305" align="alignleft" width="690"] 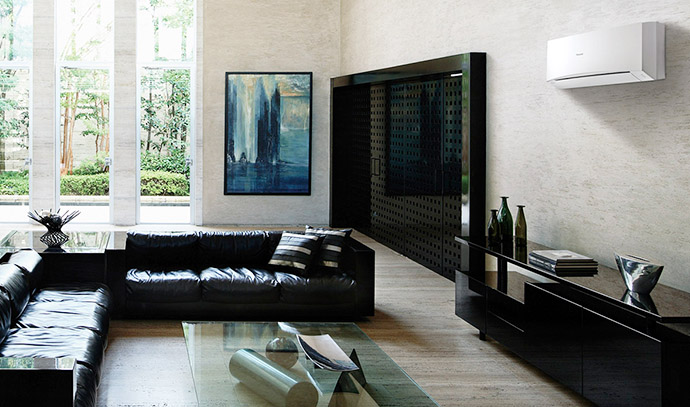 These air conditioners are capable of cooling and heating a particular room or section of your home. They consist of one or more units that are wall-mounted inside, and a compressor unit mounted on the outside wall to remove the heat extracted from the area being cooled. Considered one of the more economical and energy efficient systems, reverse cycle air con systems are also durable because they have no elements exposed to the weather.   [caption id="attachment_6304" align="alignnone" width="690"] Often known as ductless split or duct-free air conditioning, this system can comfortably cool a standard-sized home without extensive installation costs as they don't require ducting. Made up of two key components – an evaporator and a compressor – that are separated, with the former located inside and the latter located outside. Quality split-screen systems also include a built-in air-purifying filter that traps fine airborne particles like dust and smoke, decompose odours, and even absorb and deactivate bacteria and viruses.   [caption id="attachment_6307" align="alignnone" width="690"] Ducted air conditioning is considered the quietest and most versatile of all aircon systems. Image via Brisbane's The Cool Shop.[/caption]

The ideal choice for evenly distributing cool and warm air across large spaces, ducted air conditioning systems feature unobtrusive vents installed either in the ceiling or under the floor. The air is circulated through a network of concealed ducts, which you control with a hand-held remote. In fact, you can regulate each room, or 'zone', separately, enabling you to climate control different sections of your home at the same time. While ducted systems can often be retro-fitted, they're best installed during the planning, building or renovation stage to ensure the system can be properly accommodated.   [caption id="attachment_6308" align="alignnone" width="690"]

The more stars an air conditioner has, the more efficient it is.[/caption]

In a bid to decrease energy consumption, all ducted air conditioners with a cooling capacity of up to 65kW sold in Australia must comply with the Minimum Energy Performance Standards (MEPS), as outlined in Australian Standard 3823.2:2013. You can find out more here. Cooling-only and reverse cycle models are required by law to display energy rating labels, which carry a 1 to 6 star rating. So, the more stars an air conditioner has, the more efficient it is. Cooling efficiency is indicated by the stars located in the blue band, while heating efficiency is indicated by the stars located in the red band. Aircon models that are super-efficient are capable of earning a 7 to 10 star rating, with the additional stars located in a crown above the label. According to Australia's Equipment Energy Efficiency (E3) program, the following air conditioners are not currently required to carry an energy rating label: We recommend you also check out Architecture and Design's review of energy efficient air conditioners.

Which type of air conditioner do you need?

If you're looking for an air conditioner to cool your home this summer, consumer advocacy group, Choice, has a few tips to ensure you buy the right one for your needs.   [embed width="" height=""]https://www.youtube.com/watch?v=SzGhTvo7sW4[/embed]   Top image via Valley Air Conditioning
Back to top