5 simple steps to create a mudroom

Phyllis, May 2015
[Above image courtesy of HGTV, Photo By: Design by Traci Zeller]   “Mud, mud, glorious mud, nothing quite like it for...” making a mess to be honest. Now I like a good mud pie as much as the next person, but since I've grown up and had to deal with the aftermath of fun in the garden being traipsed through the house, I have to admit I've gone off the whole institution a bit. If your entire house is a mudroom, fear not. There are a few steps you can take to contain the mess in a designated area.   A mudroom is an area in the house that creates a barrier between the indoors and outdoors. They’re quite common in cold, wet climates like Europe and the US, where soggy, snowy clothes and shoes need to be removed before entering the main house. Of course, here in Oz we can rip off our grotty gear outside even in the middle of winter. But it still needs a place to live. Then of course there’s the question of the other things we tend to dump in the entryway: school bags, jackets, umbrellas and shoes. Not to mention the swimmers and towels as people run in and out from the pool. Just because your home wasn't built with a mudroom doesn't mean you can’t create one, while those of you who plan to build a new home may want to consider incorporating one into your design.

Here are some of the must haves and things to consider: 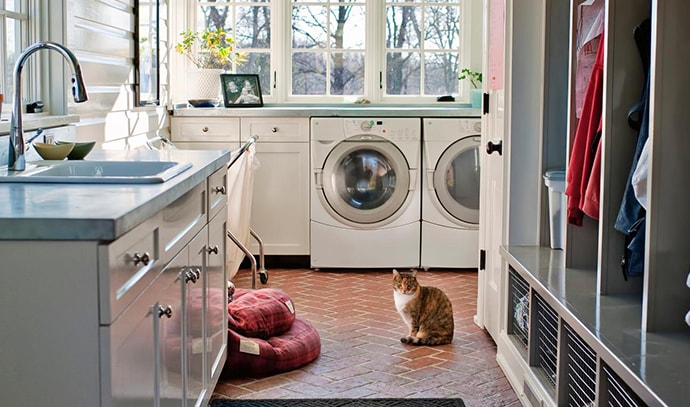 Source: HGTV Photo By Courtesy of Emily Fisher of Rock Paper Hammer; Photo by Andrew Hyslop[/caption]   Mudrooms aren’t usually in the main entry (what would the guests think?) but are in a secondary entrance like the back door or laundry. If the laundry is too small or inconvenient to act as a mudroom, perhaps a section of the back verandah could be partitioned off or, if the design is attractive enough, simply set up at the end near the laundry door. Another option, if you enter the house via the garage, is to set up a section near the door that enters the house, or just inside the door.   [caption id="attachment_1793" align="alignnone" width="690"]

Source: HGTV  Photo By: Design by Jane Frederick[/caption]   Wherever your mudroom is going to be, start with an easy-to-clean, non-slip floor. Verandahs and laundries have perfect floor finishes, but if you’re creating a new space, go with non-slip tiles or vinyl.   [caption id="attachment_1792" align="alignnone" width="690"] Source: HGTV[/caption]   Next you’ll need some storage, so consider your family’s activities and make sure there’s a place for everything. Many mudrooms feature a bank of cubbies or open storage lockers – one for every member of the family. Inside each compartment are some hooks for coats and towels, shelves for bags and storage for shoes at the bottom. Consider a shallow tray for the shoes to sit on. It will catch any dirt or drips and can easily be carried outside and washed as needed. Maybe add some decorative pebbles to make it look pretty as well as practical.   [caption id="attachment_1791" align="alignnone" width="690"] 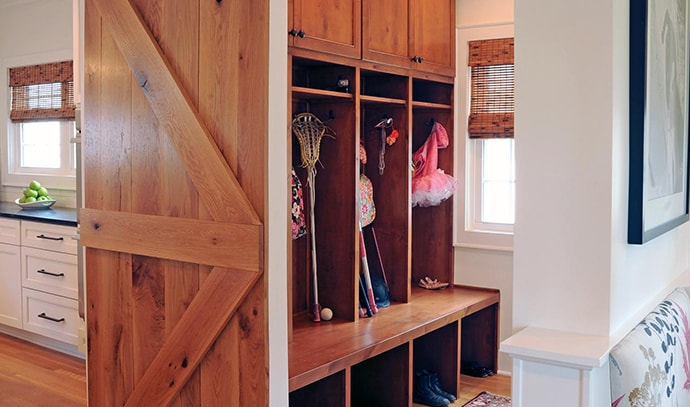 Source: HGTV Photo By: Design by Jeffrey Brown, Monica Miller and Stefanie Ciak of J.S. Brown & Co.[/caption]   Shoes are fairly easy to remove, but muddy work boots are not. A bench or chair will make it easier to pull them off at the end of a hard day.   [caption id="attachment_1790" align="alignnone" width="690"]

Image by Michelle[/caption]   Of course the ultimate mudroom would include a shower and toilet. People could run in and out to use the loo during swimming season without trailing water through the house while the gardening and mowing aficionado could clean up AND store their dirty gear in the same spot.
Back to top